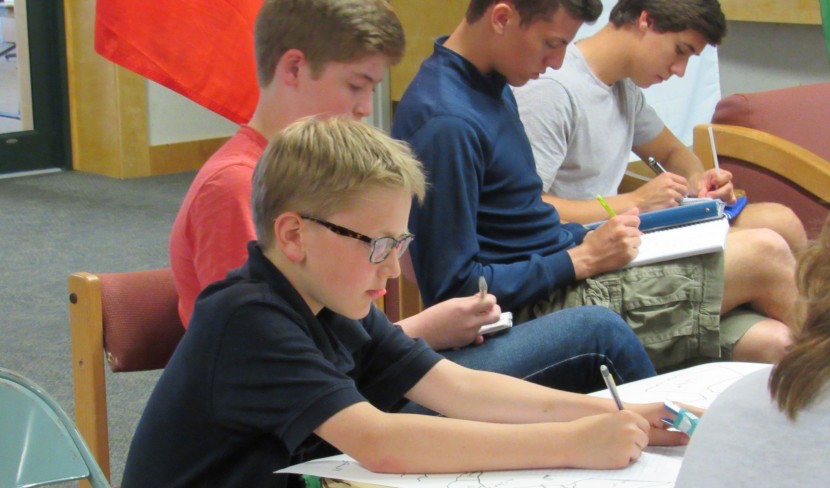 William Scannell, our youngest grant recipient, is a veteran QFI student who spent his summer at the Middlebury-Monterey Language Academy learning Arabic.

My going to MMLA was a big commitment for everyone involved.  I’m ten years old, and so being away from my family in Alaska for a month was a big deal.  It wasn’t easy for my mom and dad and brother to not see me for all that time, either.  QFI committed money to send me, so there was commitment all the way around.

When I committed to attend MMLA for the summer, I did not realize that it would be as rigorous as it was.  I don’t mean just the language learning part of it, but going away for a month from home is serious business.  You really had to try not to learn anything to not learn anything.  The food was not the best, and having a roommate who spoke a ton of English didn’t help either, but because my expectations were high, I’m not surprised that it wasn’t perfect.  Ramadan meant that many of the teachers were fasting and some were overall more grumpy than they probably normally were.

I really love Arabic, and to stick to the language pledge was a challenge. My Arabic got better because of it, seeing as it was an Arabic 24/7 camp.  MMLA is probably the only place where people speak only Arabic. In many parts of the Arab world people know English, it’s easy to say stuff like: مرحبا، كيفك؟ I am fine. Or in Lebanon, where French, English. and Arabic are mixed all the time, the joke is: Bonjour, كيفك؟ I am fine.

The age was a big difference. I mean, I was 4-9 years younger that everybody, so there were kids shaving, and such. They also made a lot of jokes that I didn’t understand. Although to me they were so much older and bigger and stuff, to them I was like the little brother they never had. Overall, it was a fun thing being the youngest.

There were 13 advanced kids, 7 of whom were from the Middle East, then around 20 total in the intermediate/advanced into intermediate, and then about 20 in the beginners. Many of the other kids were struggling to read and write, which was like seeing myself when I was younger, and so I tried to help them. When we were given text of conversations to read to each other, it would generally be one different paragraph each time repeated back and forth multiple times, and for me it would take 10-15 seconds to read my part, and for my partner it would be generally 5-7 minutes. But even then, I was too low to be advanced, but too high for the intermediate, but because they didn’t want me to hold the upper kids back, they kept me with the lower group.

There really is no standard way to learn Arabic, or at least in the MMLA group, because everybody is at a different level and learned in a different way, so it was pretty cool to see how there were a ton of kids who knew nothing, and then everybody else, some knowing more than others, and some knowing less. Like the sea, how there is never really a wave that’s perfectly the same.

I liked all of my teachers, so, thank you. The teachers and RAs were from Jordan, Egypt, Yemen, Algeria, and the USA. So really, it was nice to meet people so many different places.

I love the Arabic language, and plan to continue to study it. I thank QFI, and all who have supported me through this. Thank you!