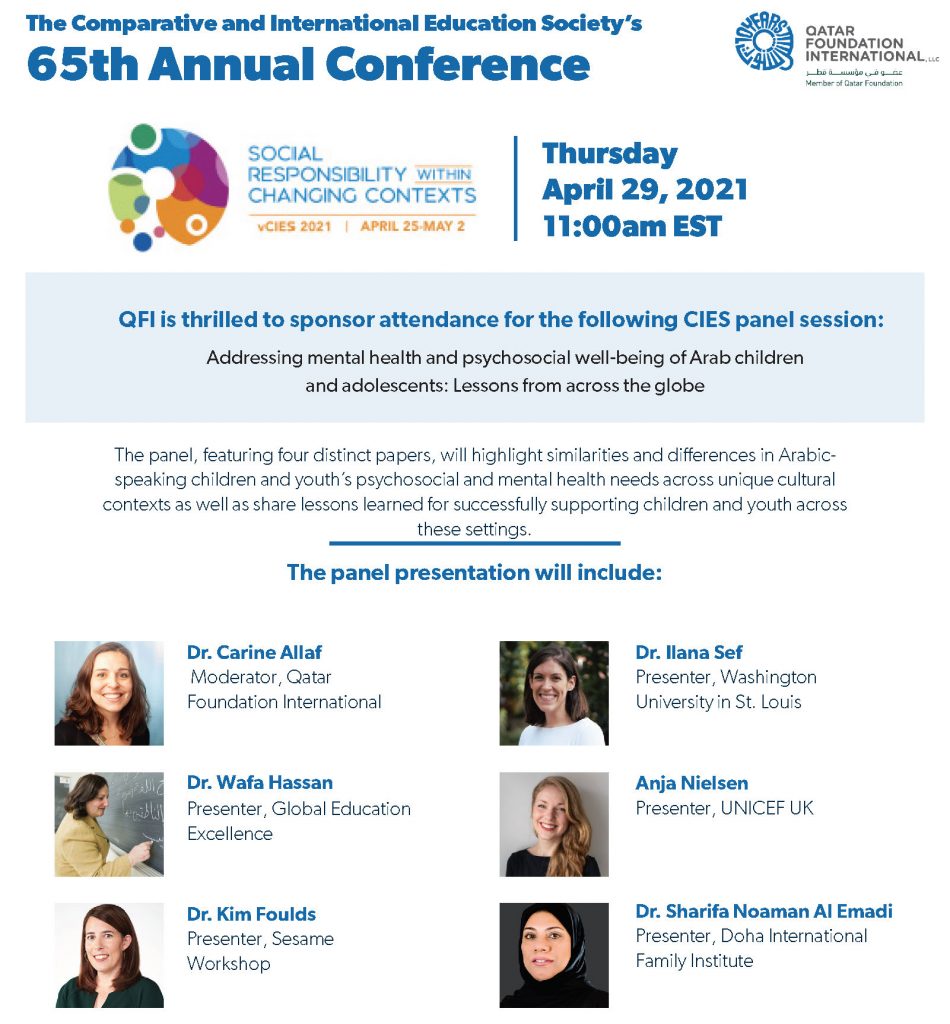 By Cierra DePalmo – Every year, Qatar Museums facilitates the Year of Culture campaign, a cultural exchange program that aims to engage Qatar with an international audience. In celebration of this year’s 2021 Year of Culture between Qatar and the United States, QFI is excited to host special programming throughout the year. To kick off QFI’s Year of Culture events in the U.S., QFI recently sponsored attendance to the panel session “Addressing mental health and psychosocial well-being of Arab children and adolescents: Lessons from across the globe” at the Comparative and International Education Society (CIES)’s annual conference, which was held virtually this year.

The panel featured distinguished researchers who discussed their work on psychosocial and mental health outcomes with schools, families, and communities in a variety of contexts throughout the United States, the United Kingdom and Ireland, and in variety of countries across the Middle East, including Qatar. The panel was brought together and moderated by QFI’s own Dr. Carine Allaf, Senior Programs Advisor.

Dr. Wafa Hassan of Global Educational Excellence, a charter school network located in Detroit, Michigan, and Dr. Ilana Seff of Washington University in St. Louis began the panel with an exploratory study conducted in the Detroit Metropolitan Area of the United States.[1] The study used qualitative and quantitative analyses to identify protective factors and group differences in the welfare of U.S. – and foreign-born Arab adolescents following immigration to the U.S. Data collection methods included administration of a survey questionnaire to 176 students between the ages of 13-22, key informant interviews with school staff and community service providers, student focus group discussions, and caregiver interviews. This study is part of the larger QFI-funded Study of Adolescent Lives After Migration to America (SALaMA).

Dr. Hassan summarized the implications of their findings, stating, “For foreign-born Arab adolescents especially, the study suggests that it is crucial for schools and community organizations to deliver culturally responsive interventions and services, specifically focused on 1) destigmatizing mental health and psychosocial wellbeing; 2) boosting existing sources of resilience; and 3) encouraging help-seeking behaviors.”

Next, the panel featured Anja Nielsen of UNICEF UK, who presented the organization’s research in collaboration with Refugee Education UK (formerly known as Refugee Support Network) on understanding the barriers and supports for young refugees transitioning to formal education in the UK.[2] QFI became acquainted with UNICEF UK’s work through their annual support of Salzburg Global Seminar‘s Education for Tomorrow’s World series. The study drew on experiences of more than 500 young people and practitioners in the UK through interviews and focus groups with practitioners and anonymised data from Refugee Education UK’s education programs. Their research found that the most significant obstacles included the burden of many regulatory processes, such as immigration procedures and application requirements.

The findings of their work also generated the development of practitioner advice sheets to help institutions like schools and universities in supporting refugees. Anja shared these advice sheets with the panel attendees, explaining, “Our hope is that these findings be used as an action-oriented approach by UK organizations throughout the local school, non-profit, and government sectors.”

Attendees of the panel also heard from Dr. Sharifa Noaman Al Emadi, a clinical psychologist and Executive Director of the Doha International Family Institute (DIFI), a sister entity of QFI and a member of Qatar Foundation. Dr. Al Emadi’s presentation highlighted DIFI’s pilot program on adolescent wellbeing in Qatar.[3] The program was facilitated in collaboration with seven schools in Qatar and examined over 1,100 boys and girls between the ages of 12-14 with the initial goal of exploring adolescents’ well-being. Throughout late January and early February 2020, pre-intervention questionnaires were conducted right before the impending pandemic. The study originally planned to introduce school intervention activities intended to increase students’ positive associations with their schools but were unable to implement the in-person activities due to the COVID-19 lockdown. As such, DIFI used the opportunity to examine the impact of the lockdown on the same indicators of adolescent well-being with another questionnaire conducted in late April to early May 2020. The entire project examined a framework of four pillars: family factors; peer influence; gender wellbeing; and extracurricular sports and activities. In her presentation, Dr. Al Emadi explored the impact of the lockdown on adolescent’s family relations.

The final presentation was led by Dr. Kim Foulds, Vice President of Content Research and Evaluation at Sesame Workshop. Their study evaluated the impact of their television series Ahlan Simsim in supporting children’s social and emotional literacy skills with 473 families in Lebanon, Egypt, Kingdom of Saudi Arabia and the United Arab Emirates.[4] Dr. Foulds explained that Ahlan Simsim programming is innovative in its use of Educated Standard Arabic rather than Modern Standard Arabic, which is most commonly utilized in children’s programming. The study found that after viewing Ahlan Simsim over the course of four weeks, children learned new vocabulary words and emotional management strategies that parents reported their children were able to apply in day-to-day life. Findings also suggested that the show is supporting both children and parents’ emotional vocabulary and management strategies, expanding the evidence to suggest that co-viewing benefits both parent and child.

Dr. Foulds shared the sentiments of a mother in Lebanon, who described the impact of Ahlan Simsim on her son, “After he finished watching, he asked me about the meaning of loneliness and after we talked, he went to get a piece of paper to start drawing like he saw [in the show].”

Additional information about the studies mentioned in this blog can be found below:

Study of Adolescent Lives After Migration to America (SALaMA)