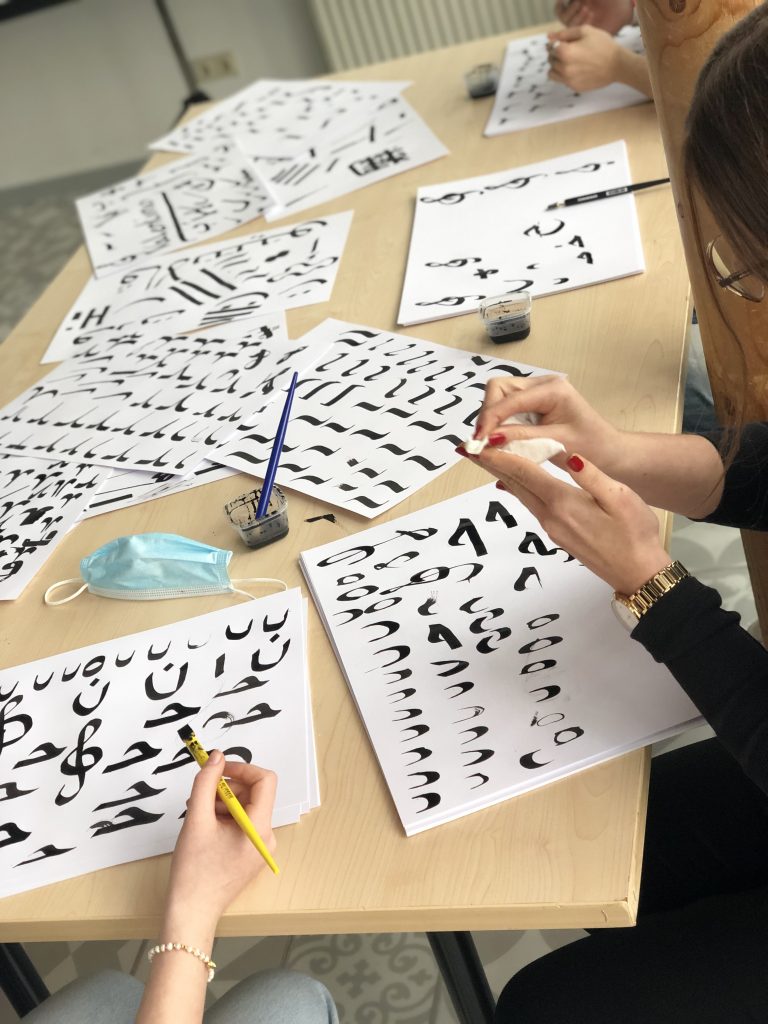 QFI supported the visit of a group of students who are studying Arabic at Salzmannschule Schnepfenthal to visit Berlin in November 2021. The students explored vibrant Arab culture, music, and calligraphy in Germany’s capital city. Below is a description of the trip written by one of the students studying Arabic.

Berlin is not only the capital of Germany, but it is also of great cultural significance. The reason: the high population of almost 4 million people, which has resulted in a variety of different cultures in this metropolis over time. These cultures also include the 5 world religions, one of them Islam.

Students of the Arabic course in their senior year of the Salzmannschule Schnepfenthal (Thuringia), made it our task to experience Arabic culture in Berlin and therefore travelled there from 3rd November 2021 to 5th November 2021. We visited various exhibitions and buildings and took part in workshops about Arabic culture.

On Wednesday, 10 November, we first took the ICE train from our school to Berlin, where we were warmly welcomed by the organizer of our trip. Then we arrived at the hostel “Generator Berlin Mitte”. After checking into our rooms, we went straight to our first destination, a Lebanese restaurant. There we started our stay in Berlin with delicious Arabic food. At around 2 pm, we started our 2-hour city tour on the topic of “Islam in Berlin”, which took place in the colourful Kreuzberg district of Berlin. We learned a lot about Muslim immigration during the last centuries and the beginning of Muslim communities here in Germany. Furthermore, the very enthusiastic guide showed us 3 mosques which could not have been more different. Afterwards, we were given 3 hours of free time, which most of us used to explore Berlin. A small group went with the Arabic teacher to one of the mosques, which we had only been shown from the outside before, but which is also an Islamic shopping centre called “Maschari Center”. We were able to admire the magnificent architecture and a prayer room. 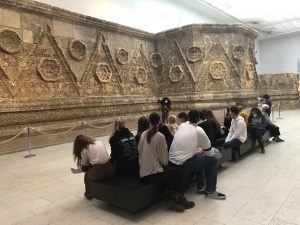 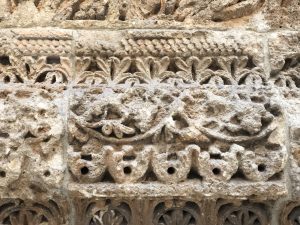 At 7 pm we all met at “Kreuzberger Himmel”, a Syrian restaurant run by refugees. There we ate delicious culinary dishes again. We had everything from falafel to fattoush. Afterwards, satiated and satisfied, we took the underground back to the hostel.

The next day, we went to the Museum of Islamic Art, where we admired Arabic architecture and ancient Babylonian art, including a huge gate with walls in magnificent colours. 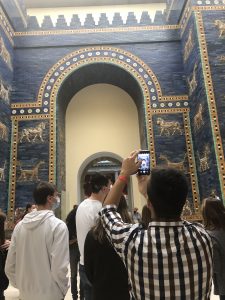 Afterwards, we went straight to Daniel Arab’s calligraphy workshop, which we all enjoyed very much. In the beginning, we “painted” a few strokes and shapes, and later even a few words and our names in Arabic. 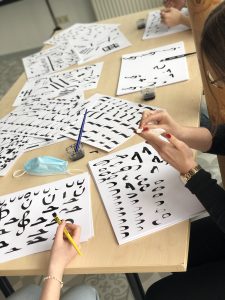 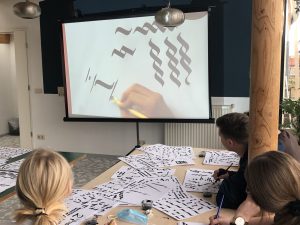 After the workshop, we were given free time and met again at 6 pm, where we visited the German Arab Friendship Society (DAFG). There we experienced a live interview with the Algerian singer Momo Djender, who talked about his musical journey as well as North African music. In the end, we were even allowed to try out his instruments. After that, we had the rest of the day free. 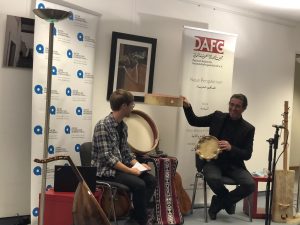 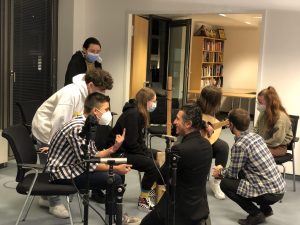 On Friday, our last day in Berlin, we had an oud workshop in the morning with Mohamed Khoudir, who showed us how to build this North African instrument. Then we played on Arabic drums to different rhythms, which was very fun. Afterwards, we got our last free time and later met for the last activity, an exhibition of Arabic children’s books. We were divided into 2 groups and viewed excerpts from the books, but without text. It was impressive to see how differently the different artists had depicted their stories. After the guided tour through the exhibition, it was, unfortunately, time to go back to the Salzmann School. This was the end of our wonderful excursion, from which we took away a lot of knowledge and impressions.

At this point, I would like to thank our two teachers on behalf of all the students of the Arabic course for the unforgettable time in Berlin. A big thank you also goes to the organizer of this trip, who was there for all the activities. Thank you very much!