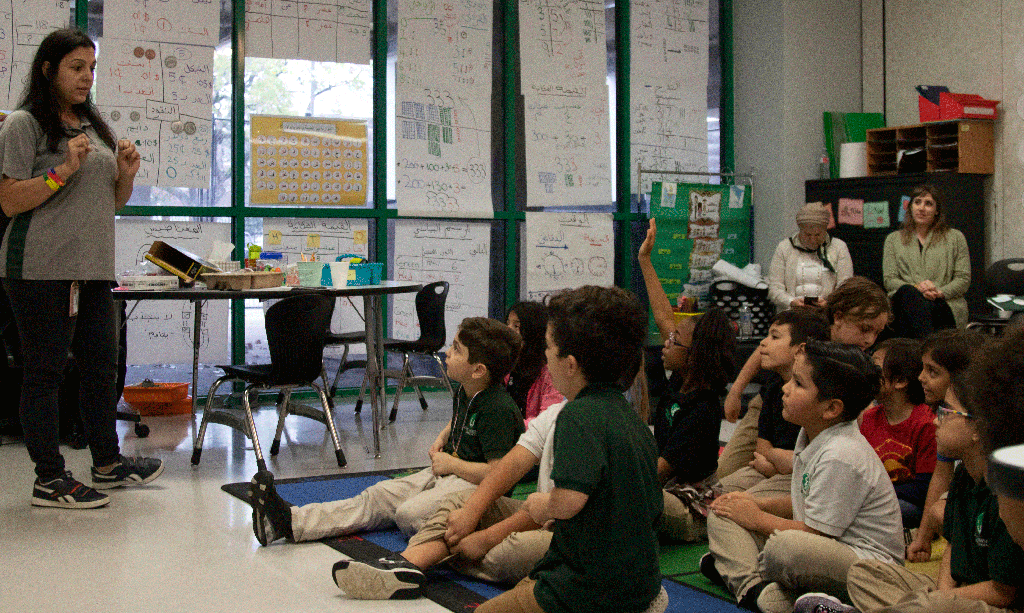 Summary taken from a contribution by Carine Allaf to the April/May 2020 edition of the Language Educator, a publication for ACTFL members.  You can find the full article here

Arabic is a widely spoken language in the United States and according to a 2016 Pew Research Center study, it is also the fastest-growing.  With the help of Qatar Foundation International, schools have begun developing and implementing Arabic dual language immersion (DLI) programs.  Through QFI’s efforts, there is an entire network of Arabic immersion teachers who are sharing resources and feedback, meeting through the professional development- and training- focused summer institutes that QFI supports. There are four public schools with Arabic DLI that QFI has closely worked with and took lessons away from as a result of the ongoing partnership: Brooklyn, NY; Baltimore, MD; Houston, TX; and Los Angeles, CA.

PS/IS 30 has students with Yemeni, Egyptian, Lebanese and Syrian backgrounds, and their DLI program allowed Arabic speakers to improve their English while their peers learn Arabic.   At the beginning, in 2013, they started with one kindergarten teacher, teaching half the day in Arabic and half in English.   As the program grew, it incorporated more “side-by-side model” set-ups where students have one teacher for the Arabic part of the day and one for the English part. 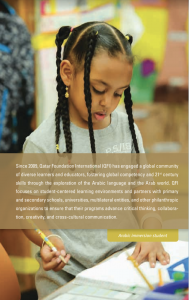 The Baltimore International Academy (BIA) includes Arabic as an immersion language of several offered such as Spanish, Chinese, Russian, and French. A majority of the students do not have any background in the target language.  The popularity of BIA led to the opening of a second school called BIA West.

The Arabic Immersion Magnet School (AIMS) is the first all-school Arabic immersion public school in the United States, opened in 2015.  It received approval to go from pre-kindergarten to eighth grade, though at the moment, the school goes to the fourth grade.  The program starts with a side-by-side teacher model from pre-kindergarten to second grade, and then a departmentalized approach in third and fourth grades.

In 2016, the Elizabeth Learning Center started the Arabic DLI program with one kindergarten class with mostly students from Spanish-speaking homes, expanding up to third grade. The program, not having any Arabic speaking children, is considered a one-way model but the goal is to eventually be a two-way program.

From these programs, we have made observatio 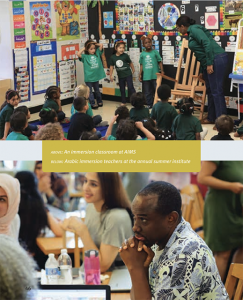 ns and had insights over what makes an Arabic DLI program work.  First, it is important to learn from DLI with other languages, particularly those not utilizing the Roman alphabet, to identify similar opportunities and challenges.  Programs must decide target language depending on content areas, being consistent with state testing, and keeping to program plan/design throughout.  The curriculum must teach the language in a way that supports various modes of communication, including interpretive, interpersonal, and presentational as well as intercultural, taking into consideration Modern Standard Arabic and Arabic dialect. Lastly, schools must be prepared to explain why they have chosen Arabic for their DLI program, language being political and Arabic often facing a variety of stereotypes.

Working with Arabic DLI programs in various parts of the country, QFI offers its wealth of experience to schools that wish to implement their own programs.  Contact us at arabic@qfi.org if your school is interested in fostering greater intercultural understanding.