Once a century, our world undergoes an energy transition – a multi-dimensional transformation of energy systems. Previous generations had the Industrial Revolution, or the ‘age of steam’. Now we are living through our own energy transition. And it differs from those that have gone before in one crucial aspect.

Today’s ‘low-carbon’ energy transition is being driven not by science, but by climate change and its impact on our planet. The Middle East, due to its climate and a variety of challenges that have plagued the region for decades, is set to be disproportionately affected by it. And if we are to make our economies and societies resilient in the face of this challenge, we have to invest in research, development, and innovation (RDI), and in education.

Warnings about the potential impact of a warming climate have quickly turned to reality for the region’s population of nearly 400 million, with record high temperatures, rising water levels, and the extinction of a variety of species. Indirect socio-economic challenges have emerged, including increased migration and concerns about food security, triggered by droughts and harsher agricultural conditions. This is why a focus on (RDI) and education is vital in ensuring the region can adapt dynamically to a fast-changing world – and that includes embracing this new energy transition.

Oil and gas producing countries in the Middle East find themselves in a paradoxical situation. They are, and will be, particularly negatively impacted due to their geography and the already warmer climate they operate within. And while they are well-positioned to adapt in the short term, partly due to existing fossil fuel exports, in the longer term decreasing demand and revenues will impact oil and gas producers’ ability to adapt to the effects of climate change. 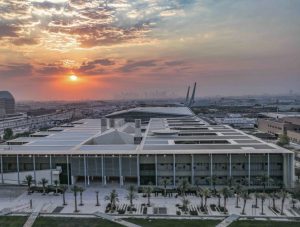 The Carbon Tracker Initiative estimates that up to $2 trillion of fossil fuel assets could become stranded by the middle of this century, due to significantly lower demand for oil-based products and the global push towards electrification and decarbonization. And while the Middle East can extend the life of its assets through having the most efficient and cost-effective energy operations in the world, it is arguably just a matter of time until the world moves completely away from fossil fuels. These changes are having – and will continue to have – a significant structural impact as the low-carbon transition unfolds, not only on fossil fuel-dependent economies, but also on an entire region that largely depends on these revenues for its future socio-economic development.

As the low-carbon transition takes place and renewable energy takes on a more prominent role, energy geopolitics will be significantly altered, with supply moving closer to demand. The Middle East‘s tremendous natural resources that can make it a benefactor of the transition. Decarbonisation technologies can extend the life of its current assets and provide the traditional fuel the world needs, through Liquified Natural Gas and other ‘transition fuels’, for decades to come.

Looking to 2050 and beyond, the region can leverage its geographically strategic location and its sophisticated industrial sector to reinvent itself as the global epicentre of renewable energy. It can utilize its abundant solar irradiation, sources of wind, and vast lands to produce and export renewable sourced electricity. It can be a key strategic transit location connecting Africa to Europe and parts of Asia. And as hydrogen technology evolves, the Middle East can be the home of large scale ‘green’ or ‘blue’ hydrogen energy, taking advantage of depleted fields ideal for storing carbon dioxide. RDI that is specifically focused on these areas will position the region to be a major player in a low-carbon era.

For now, with some of the most professionally-run energy companies and sovereign wealth funds in the world, the Middle East can ensure its economies continue to develop. However, to thrive long-term, a serious focus on RDI and education – combined with economic diversification – will be key to shaping the region’s future.

By building on the great tradition of Arab scholars such as Ibn Khaldun and Al-Kindi, and leveraging what has already been built, the Middle East can ensure that energy transition becomes an opportunity rather than an existential crisis. And by fostering a 21st Century workforce immersed in artificial intelligence and data analytics, multidisciplinary social sciences, and critical, globally-minded thinking, supported by an ecosystem that encourages entrepreneurship and risk-taking, the region will have the edge that allows it to compete in a global marketplace.

Transitions are periods of change, and this energy transition will be especially critical, as the world is in a race against its carbon budget. The impact of COVID-19 – reflected in energy markets by the recent collapse in the price of US oil futures – indicates of how quickly our world can change.

And it demonstrates why developing a thriving RDI and education ecosystem is not only the best way of building resilient and adaptable societies and economies that are ready to manage the upcoming global low-carbon transition – it is the only way forward.