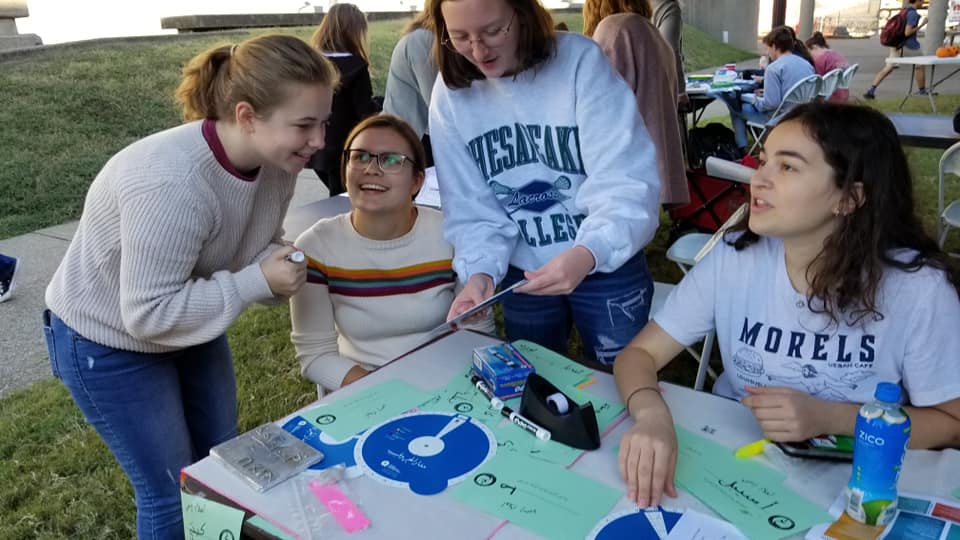 This article is a contribution to the Qatar Foundation website. You can find this article in English here, and in Arabic here.

For nearly 10 years, English-speaking Arabic learners around the world have had a unique tool to help them learn a very different alphabet – the Wheel of Letters, or Madar Al-Huruf. At Qatar Foundation International, it’s called the Q-Wheel.

The beautifully designed rotatable disc matches Arabic letters and their sounds to similar-sounding letters and combinations in English. It’s been ideal for new learners to begin learning by spelling their own names in Arabic. And it is available as a physical wheel and also as a mobile app. 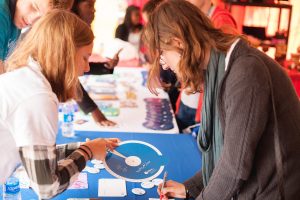 Now Arabic learners in Germany will also be able to benefit from the fun, engaging tool, with Qatar Foundation International (QFI) launching a new version of the Q-Wheel app for German speakers.

The Q-Wheel story began when Muneera Al Badi was living in the United States with her family and wanted to put her degree from Virginia Commonwealth University School of the Arts in Qatar – a Qatar Foundation (QF) partner university – to good use. Searching online, she came across QFI.

“I really connected with their mission to bring the Arabic language into classrooms to reach young learners,” she says. “I knew that there had to be a way to demystify the Arabic characters and connect them to the English language phonetically.”

Once she had come up with the concept of the rotatable wheel, Al-Badi liaised closely with teachers to make the content as clear and usable as possible. The wheel was then publicly introduced in June 2012 in Rio de Janeiro at the Qatari Pavilion during the Rio+20 UN Conference on Sustainable Development.

“It proved extremely popular,” says Muneera. In fact, the Q-Wheel went on to be featured at all QFI’s events and celebrations.

The wheel has a wide range of potential applications beyond transliterating. Arabic language teachers have used it as a recruiting tool when students are choosing which foreign language to study. 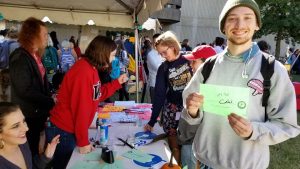 “It’s an opportunity for new language learners to appreciate the beauty of the language by overcoming one of the most prevalent stereotypes of the language— that it is a hard one to learn.”

Jandali underlines that placing the Q-Wheel in students’ hands and giving them the opportunity to write their names in Arabic with absolutely no prior experience or knowledge of the language, helps bridge the gap between students and the love of learning Arabic. And she adds: “The Q-Wheel is an affirmation— if I can write my name in Arabic, then I can certainly learn the language.”

The Q-Wheel has been widely used in art classes for calligraphy and has also been utilized as a means of introducing Arabic cultural elements in classes including social studies and history. “At the first day of every semester in my beginning Arabic classes, I use the wheel to show my new students how they can write their names in Arabic, even without knowing the alphabet,” says Lhousseine Guerwane, Arabic instructor at the Gatton Academy of Mathematics and Science and Western Kentucky University.

Guerwane and his student volunteers have used the Q-Wheel at recruiting events and local and international festivals. “The wheel facilitates learning and makes it fun,” he says. “This gives new learners hope that soon they will be able to read and write anything in Arabic. In a few short weeks, it all starts to make sense, and they decide to take more classes and even major in Arabic.”

Throughout the Q-Wheel’s path, QFI has covered the costs of producing and printing the physical wheels and accompanying workbooks and supported its development and distribution, bringing it to tens of thousands of teachers, students, conference attendees, and others all over the world.

Having seen the success of the wheel, QFI realized that to provide truly global access, we needed to go digital. First, it teamed up with QF member Hamad Bin Khalifa University’s Qatar Computing Research Institute to launch an initial beta mobile app of the wheel. Next, QFI brought in Mindgrub, an award-winning app-development team, to update and redesign the mobile app, which now includes sounds, so beginners are able to hear, not just see, the Arabic alphabet.

In 2016, the app won a World Summit Award within the WSA-mobile category. “I was very excited to have developed a tool that not only represented me as an inventor but also highlighted my country, Qatar, and showcased my beautiful mother tongue, the Arabic language,” says Al-Badi.

This free app has now been rated and downloaded in many countries all around the world, fulfilling its goal of building bridges between peoples and cultures through language – and with it now being available for German speakers, wherever they may be, this is a wheel that continues to roll.