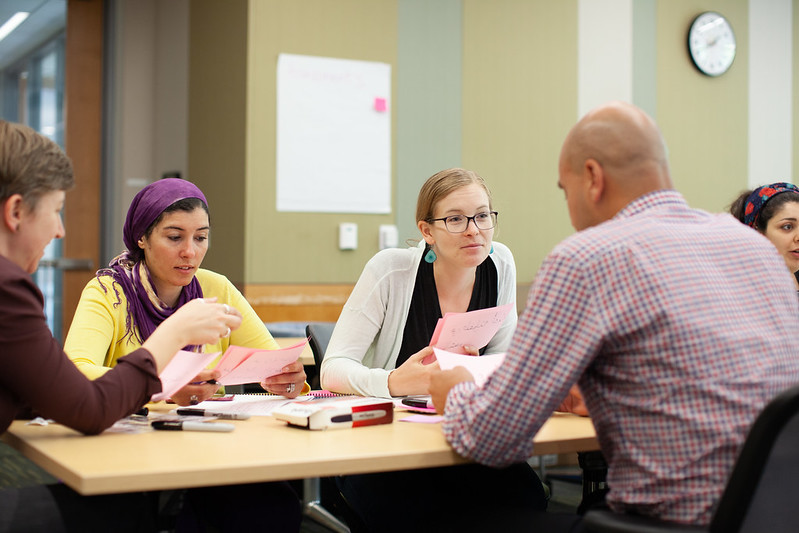 This article is a contribution by Julia Phelan Sylla to the Qatar Foundation website. You can find this article in English here, and in Arabic here.

Ever since QFI’s founding in 2009, we have pioneered a unique model in our mission to support the study of the Arabic language around the world.
We not only provide funding, we also work closely with key partners in a flexible and innovative way to ensure that their needs are met – bearing in mind that local contexts, cultures, and challenges vary, from Los Angeles to London, from Boston to Berlin. And from the very beginning of our relationship, we work with these partners to create successful, independent programs – our ‘graduates’, ambassadors, and lifelong members of the QFI community.
As Qatar National Day and World Arabic Language Day approach, and just days away from the start of the Qatar-USA Year of Culture 2021, QFI is delighted to celebrate three Arabic programs in the US states of Massachusetts and Virginia that have become fully sustainable in 2020. Their ‘graduation’ means we can continue to help even more, while they can serve as mentors to new schools committed to adding Arabic as a foreign language to their curriculum. And this reflects how QFI supports Qatar Foundation’s role as a custodian of advancing the Arabic language, culture, heritage, and knowledge. 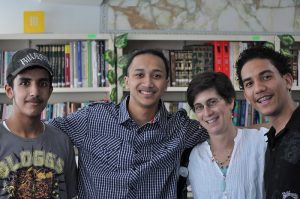 One of the first schools we worked with was Boston Arts Academy, the city’s only high school for the visual and performing arts. Its then-head, Linda Nathan, was so passionate about the transformative power of learning a foreign language that she had a sign in her office that read: “I’m bilingual. Mono-lingualism is curable”. The partnership swiftly took off, with the academy’s staff and students making two exchange trips to Qatar – experiences which Nathan described as “changing all of us, including me, in terms of understanding and learning about a part of a world that before we had no clue about”.
The program did so well that students from the school went on to study Arabic at college level, and Boston Arts now fully funds its own program, with its current head of school Anne Clark being appreciative that it has been able to reach this point with QFI’s help.
Meanwhile, QFI began its relationship with Boston Latin Academy in 2013. This program became fully self-sustaining, as the school district could follow the numbers: they increased so rapidly that there are now 130 students taking Arabic from grades 8-12, and levels 1-4.
“QFI helped bring the language and culture alive,” says Boston Latin’s Arabic teacher, Katie Quackenbush, highlighting the guest speakers we brought to her school, and the partnership we introduced them to with NaTakallam, an inspiring organization that brings displaced native Arabic speakers around the world together with learners via Skype.
As Quackenbush says: “It can be isolating being an Arabic teacher”. At QFI, we know this well – an Arabic teacher may be the only one in the school district. We funded Katie’s teaching certification and some supplemental overseas Arabic language study, and she says: “QFI has been a huge aid in my Arabic teaching career.”
In Virginia, QFI began its partnership with the City of Harrisonburg in 2017. It’s a highly diverse municipality in which Arabic was the fifth most spoken language, and the district’s Director of Teaching and Learning, Jeremy Aldrich, recalls wanting to have an Arabic program “for a long time”. In the process of trying to set one up, Aldrich encountered QFI staff at a conference, and a connection was quickly established. 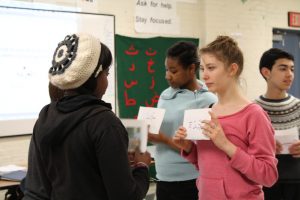 “QFI has been generous with grants,” says Aldrich, “but the best thing about them is the network of relationships.” This includes connecting Harrisonburg’s Arabic teacher with others around the country through the communities that QFI supports or helped create, such as the regional Arabic Teacher Councils, and using a QFI-funded study to help immigrant students in the city.
“As our teacher developed more skills, the perception of what materials we needed changed,” says Aldrich. “QFI’s support allowed the program to grow, and they have supported us financially for field trips and excursions.” QFI helped “relieve the financial burden”, he says, until Harrisonburg was able to pay the teacher’s salary itself. As a result, QFI’s funding this year comes in the form of a ‘graduated’ school grant – a great result in only three years.
QFI’s Grants to Schools program has helped fund the salaries of Arabic teachers, and paid for classroom supplies and materials at schools throughout the Americas and Europe. Over a number of years, QFI’s grant amount to each school should decrease annually by around 25 percent, with the school picking up more of the costs until they are covered by the school budget – just as they would be for any other subject. Once a steady number of students are enrolling in Arabic classes each year, a new community of learners can forge a strong path forward. 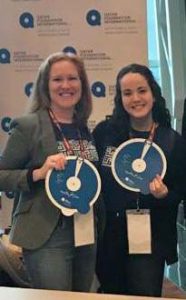 We call this the process of ‘graduating’ from our grants. We work to build strong Arabic language programs that are set up for longevity, with the goal that they should become financially self-sustainable. We provide the often-crucial funding so they can establish themselves. Once they are fully viable, it is a mark of their success that they thrive independent of our financial support while remaining core members of, and active participants in, the QFI family.
One of the keys to our model is that funding is only a part of the whole. When we work with a school district that has the drive and motivation to add Arabic language to their curricular offerings, QFI provides support around the teaching and learning of Arabic.
New Arabic teachers join a robust community of more experienced colleagues and have continual opportunities for learning and professional growth. Classrooms have access to high quality and engaging resources. This approach ensures that as school administrators work to increase budget support for the Arabic program in their school district, teachers are supported to be effective educators and build enrollment in their Arabic classes. QFI has always known that the key to healthy and successful Arabic programs are the talented teachers who encourage and support student learning to make Arabic proficiency not just accessible but attainable.
Once schools have done the hard work of covering the cost of an Arabic language program in their district budget, QFI’s network remains active for the teachers and students in each community – because we want them to continue benefiting from opportunities for development, and share the lessons they have learned and their successes with newer school programs that are in development.
Our huge bank of free online resources is still available to, and used by, these teachers and students. In the U.S, they join us at conferences and discussions, and continue to utilize and spread best practices that QFI has identified and are constantly refining. They know they always have our moral support, and the friendship and gratitude that QFI alumni have expressed are humbling, moving, and a testament to the reputation QFI has earned in our first decade. 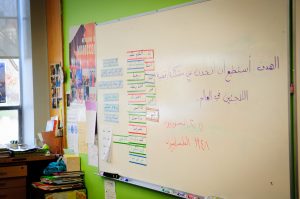 Our funding is just the start. In the 42 cities impacted by QFI grants where we work globally, with the 3,100 Arabic language teachers who have benefited from professional development and the 6,500 students who have studied Arabic in QFI-supported school programs, the relationship with QFI has been transformative. It has opened not just eyes, but hearts and minds, to both the Arabic language and the diverse cultures of the Arab world.
Then the next chapter of the story begins. QFI’s initial investment plants a seed which we help to nurture, and the resulting sustainable programs then become part of the greater community we have built.
In 2021, QFI will continue to grow and expand as we start programs in new countries – proudly connecting learners and educators around the world through the study of the Arabic language.