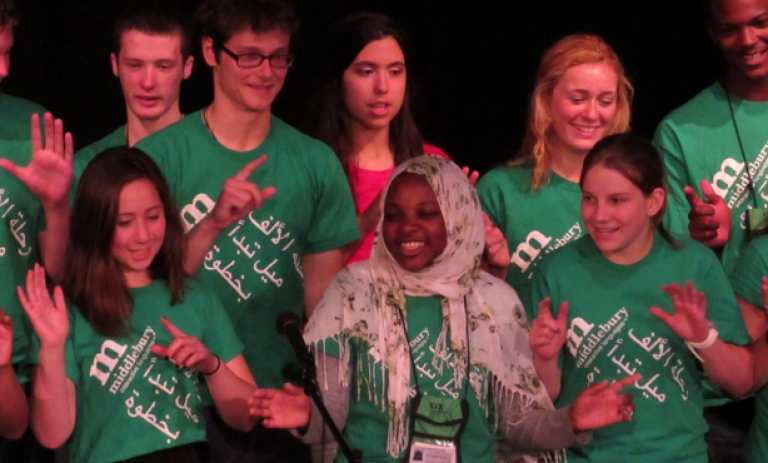 Hi! My name is Nathan Hanshew, and I currently live in Washington D.C. . I am a rising senior and I attend the Washington Latin Public Charter School. This summer, I attended a rigorous Arabic immersion program with the Middlebury-Monterey Language Academy in Green Mountain College which is located in Poultney, Vermont. There were numerous catalysts that motivated me to make the decision to study in the Arabic Academy. I wanted to study a culture, language, and religion that was obscure to me. There was a craving for me to understand issues and opinions from someone else’s perspective. I wanted to be unique. I did not want to study a language that is so common and typical amongst high schoolers such as Spanish, German or French. There was a need to push my boundaries and to set my aims for an even more challenging language, and Arabic was the perfect fit. I’ve been studying Arabic for almost a year now but during my first year in Arabic in my junior year, I realized I needed to take another step higher in the pursuit of my goal to improve my Arabic.

I had mountainous expectations of MMLA. I expected to have my communication skills and abilities to function in Arabic improve drastically. My main goal was that by the time I leave MMLA, I would be mixing up my Arabic, Polish, and English all together completely. I was looking forward to finding and making new friends that had the same motivations and ambitions that drive me. I’m glad to say that all of those expectations of mine were met, and thoroughly satisfied.

My first day at MMLA was a day full of challenges and surprises. The first couple of minutes after I arrived on campus, I was directed to a building, and within that building there was a group of Arabic staff wearing green shirts. I walked up to them and I was greeted in Arabic and was hit with a full blown out conversation in Arabic. It was startling as I was expecting English. I was given directions to my room in Arabic, told where to go on campus for classes, activities, and meals all in Arabic. Quite literally, the very second you step onto the campus, the language of English just evaporates like water. It is non-existent within your Academy.

Almost everyday I would go to the gym with my friends at 6:30 in the morning and we would work out for around an hour. Then we would all shower and go back to sleep and wake up again for breakfast. After the entire Arabic Academy was finished with breakfast, we would head to our morning activities where we learned about current events going on in the U.S., and the Arab world. Yet we were presented with all this news in Arabic. We would occasionally do some aerobics to wake us up, and then after the morning activities, we headed off to classes. Classes spanned for about 3 hours in the morning from 9:30 until 12:20. In class we learned about the different foods you would find in the Arab world, the structure of houses in the Arab world compared to the structure of houses here in the U.S. etc. We was also studied the stark comparisons and differences between Arab and American culture. We learned new vocab words, and how to conjugate in the past, present and future tenses. We also discovered the types of games that were played in the Arabic world and how the Arab calendar functions, as it follows lunar cycles.

Every student at the Arabic Academy, took in total of about 4 classes a day. 3 classes that combined into one, that spanned over 3 hours in the morning from 9:30 until 12:20 in the afternoon as mentioned earlier. Then after lunch was over at 1:20, we would have a Cultural Exploration class that lasted for around 2 hours, ending at 3:30 in the afternoon. After Cultural Exploration was wrapped up and put to bed, students would head out to their activities that they chose in the morning. Those activities consisted of playing soccer, basketball, or volleyball against the German and Spanish Academy’s, or going swimming or heading into the town of Poultney. After those activities were over at 4:45, there would be a free time period that ended at 5:45 where students were open to doing anything they wanted. On Sundays and Wednesdays though, that free time was reserved for a call back home time that lasted 45 minutes. After the free time was over, there was dinner that lasted until 6:30. From 6:30 until 8:30, there would be evening activities in which we would watch movies such as Kung-Fu Panda, or Finding Nemo in Arabic. Some days we would have Skype calls with renowned doctors or musicians in the Arab world. After the evening activities were over at 8:30, students were open to enjoying themselves until lights out which occurred at 11 PM.

Some of my highlights from the program were the friends and friendships I was able to create during my time at MMLA.  We all struggled but we all persevered together and that determination to succeed from others was fun to see. The teaching staff were also another favorite part of the program because even though they were tough, they helped you out and guided you to jumping right over major hurdles and bursting right through impenetrable  barricades. There were numerous challenges along the way; The temptation to use English to get around campus, or have the desperate urge to speak in English to the teacher so that she or he can explain verb tenses and conjugations. Yet, all that stuff became mastered progressively after the first week as my understanding of the language improved over the course of a couple of weeks.

Attending MMLA and studying in the Arabic Academy has greatly impacted my Arabic in countless ways.  I learned a humongous boatload of new vocabulary, and I was able to pick up on different kinds of dialectal Arabic such as Jordanian, Misri, Sudanese, Yemeni and other dialects as well. My passion for the language has grown so much, that I’m going to pursue a chance to try to study in the Middle East in the upcoming years.