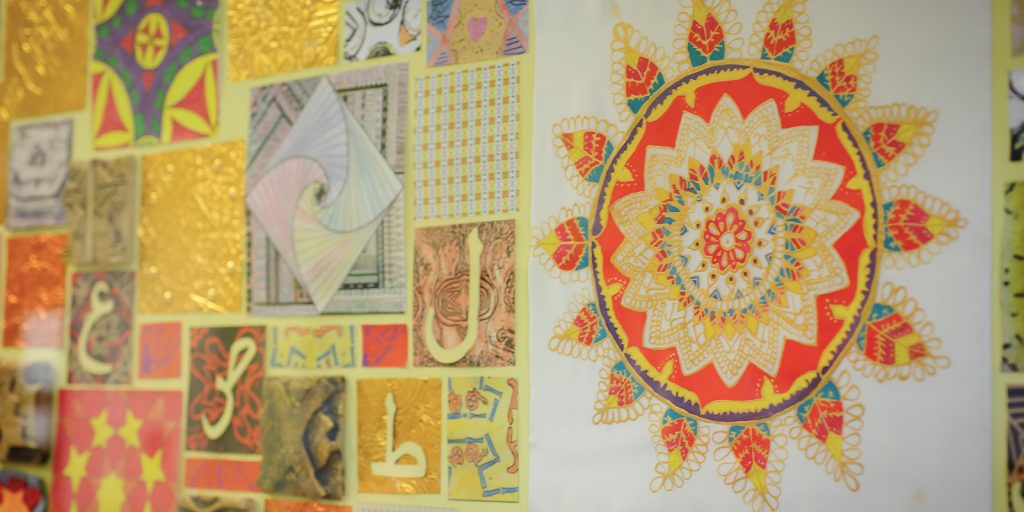 By Naglaa Elbadawi – QFI, in collaboration with Pre-university Education (PUE) Academic Affairs, asked if I would be interested in running a 6-week online workshop for students in Qatar on Saturdays. I proposed a book making program based on a very interesting experience that I had while teaching at an Arabic dual language immersion program in a NYC public school. The program in New York was very successful. It was initially a book making competition for all languages taught in the city and my class was the only one in the city representing the Arabic language.  The stories written during this project were published and circulated in the local public libraries for at least a month before they were returned to the students. I was excited about the opportunity to try this with a group of students in Qatar. 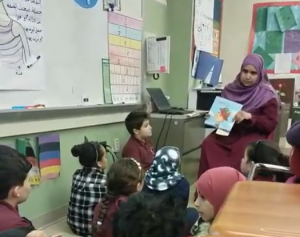 Drawing from this, I designed my six-week workshop for PUE to give the children the opportunity to author their own stories in Arabic! I picked the same age group to do the workshop as the group I worked with in NYC (grades 3-5) and planned it out with even more advanced Arabic literacy skills since the students were living in Qatar and would have stronger proficiencies in the language as a starting point. The class was great! Children were very engaged and interested in every minute of the 90-minute weekly session; they followed their Google classroom assignments; emailed their questions; and even asked to join future workshops like this one. Parents participated in the learning and development process throughout the workshop as well. The final stories were a collective effort by children and their parents together.

I was surprised to learn in the first session that many of the students were hoping to do the class in English. Once we talked about how the workshop’s goal was to help them author an Arabic story, and they saw how fun the class would be to do in Arabic, they all agreed to continue in Arabic even when they felt very challenged. Since the workshop had already started and since it was only 6 weeks long, it was too late for me to officially evaluate their language proficiency. I was able to draw significantly from my experience as an immersion teacher here in the United States to add all the language support and simplify concepts to meet the needs of the students.  One main lesson is that the next time I conduct any Arabic classes, it is important to have a baseline assessment of the students’ proficiency levels, especially because students came from a variety of schools across Qatar. My initial enrollment came from 10 different schools! By modifying and differentiating my teaching to suit the needs of individual students, they learned a lot about the Arabic language (specifically speaking and writing) all the while developing their own Arabic stories, with their parents supporting them. Despite the initial difficulty and hesitation, the students greatly improved their Arabic speaking and writing! They did a great job!

Below are excerpts of the work they submitted. 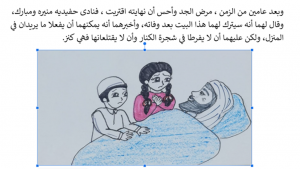 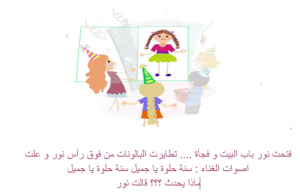 This student was the most enthusiastic although they did not know any Arabic and had never learned it, despite attending a school in Qatar. I used visual and auditory support so that I did not need to translate any Arabic materials and towards the end of class, she understood all the story elements in Arabic with just picture support. She made cognitive connections to what we were learning.  She often showed a good understanding of what she learned even though she couldn’t express any in Arabic writing. She recognized her name every time it appeared on the screen. Her story in English demonstrates an understanding of the content that was presented in Arabic! 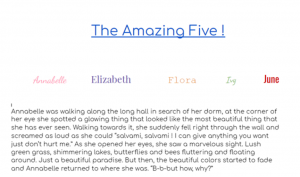