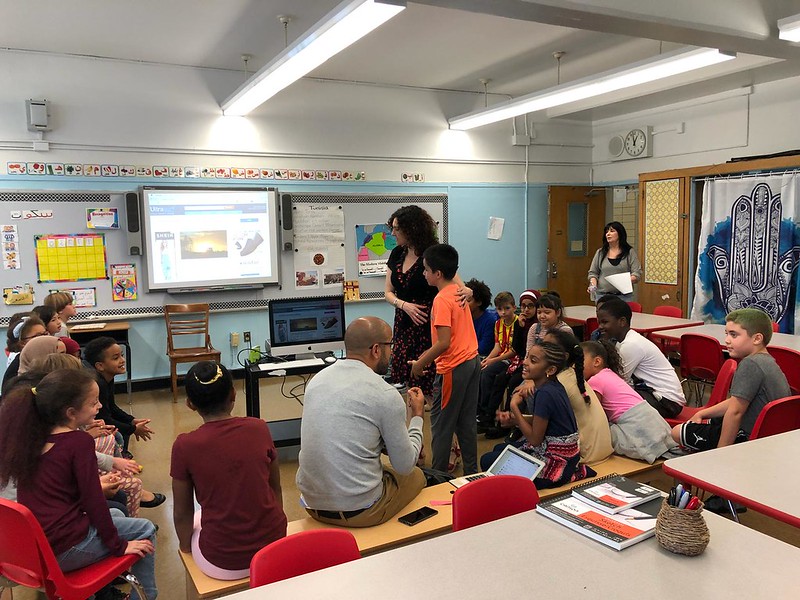 Rita Lahoud’s upbringing was the perfect preparation for a career involving the Arabic and English languages. A Palestinian-American, she was born in the United States, but at age seven she moved to the Middle East where she lived in Palestine and Saudi Arabia – the best training possible for the time she spent teaching at a bilingual Arabic/English kindergarten. 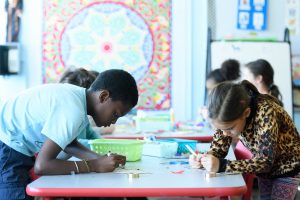 Today, with a bachelor’s degree in early childhood education and a master’s degree in special education, she currently teaches Arabic language, art, and culture at Public School 261 in Brooklyn, New York. “It’s a unique, multidisciplinary, project-based program that teaches the Arabic language through art,” she says. “Lessons are about the art and culture of the Arab world and instructions are given in Arabic.”

At PS 261 Lahoud covers everything from the millennia of Islamic art to the fabled 20th-century Egyptian singer and actress Umm Kulthum, right up to the present day. A few years ago she invited the acclaimed French-Tunisian street artist eL Seed, whose work combines Arabic calligraphy with graffiti styles, to visit. “It was great because he presented his ‘calligraffiti’ artwork and also created art for us in school,” she says. “He even tagged our classroom, so every summer I have to beg the janitors not to paint over it!” 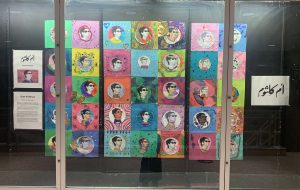 With QFI’s support, Lahoud’s third-grade students also make two visits to the Metropolitan Museum of Art, where they focus on the Galleries for the Arts of the Arab Lands and take part in workshops. “This is a very important partnership,” says Lahoud, “because it provides access for many students who would otherwise never have the opportunity to visit the museum or the Islamic and Arab art collection. It makes this exclusive art world accessible to all students, regardless of their background.”

Lahoud traveled to Beruit, Lebanon, to attend a course on education in emergencies, after which Lahoud was able to link her students to displaced children living in camps in the Middle East and Europe. 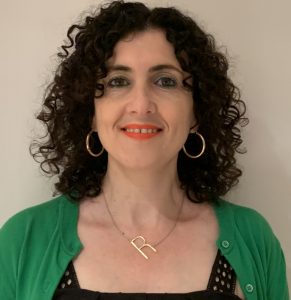 Four years ago she co-founded Go Project Hope, a non-profit organization that aids refugees through the design and implementation of health and education programs. “I was able to adapt QFI’s Arabic Animal Yoga program and use it with kids at Kara Tepe, reducing stress and increasing mindfulness.”

“I am so very grateful for all of the unique opportunities that QFI has granted me,” she says. “I am part of a large public school and I am fully aware that these types of experiences are not available to all educators.” 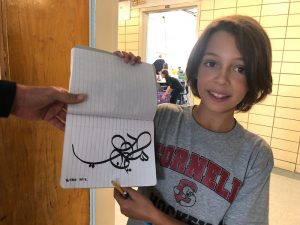 So what motivates her as an Arabic teacher? “Diversity in education and every area of life is now valued more than ever,” she says. “Communication is key and language is a huge player.” Lahoud believes that as Arabic is spoken by over 400 million people, is one of the six United Nations languages, and is also the medium for the religious texts and words of Muslims worldwide, it is a particularly important language to learn.

“Even if my students do not grow up to be Arabic language experts or even fluent in the Arabic language, they will have deep knowledge and respect for Arab culture and art,” she says. “This is so important in today’s political and social climate. Education programs like ours can go a long way in changing perceptions, and in giving children the necessary tools to refute stereotypes.”

Lahoud has certainly had an impact. “My students think the Arabic language is special,” she says, “and that the diverse Arab culture and art is beautiful.”