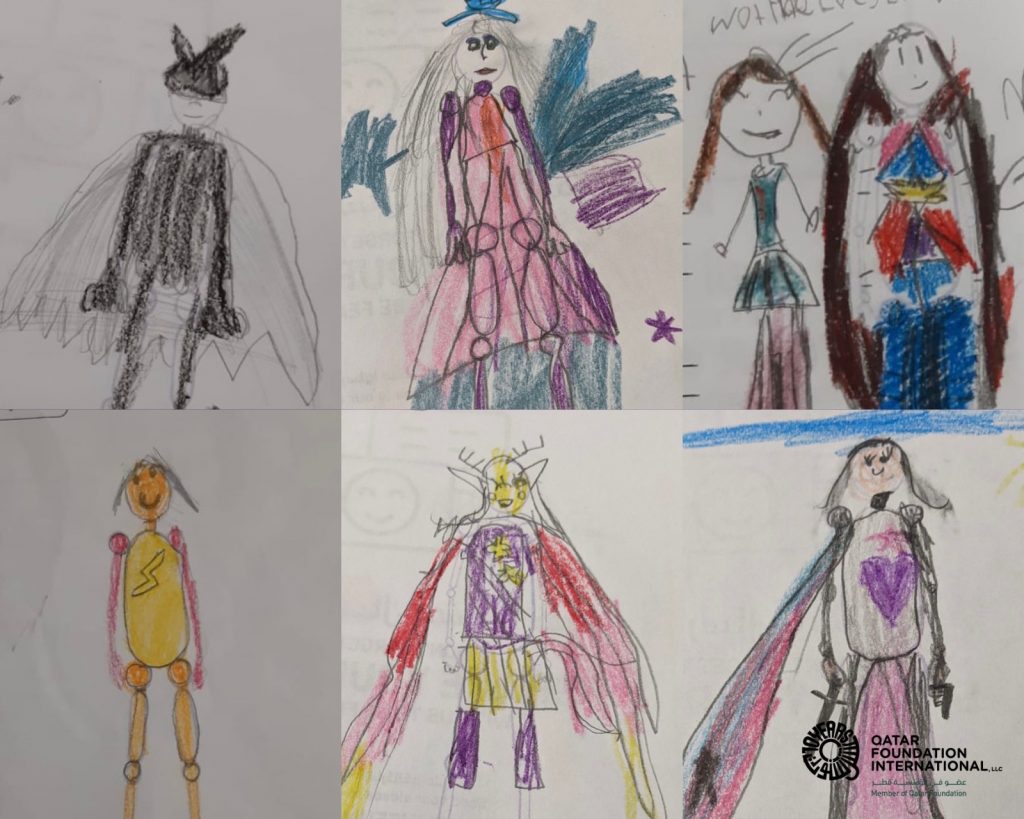 Muneera Saad Al Romaihi is a Qatari children’s book author whose first book, Khayal Manal, خيال منال, is about a lively young girl named Manal who loves reading her stories and living imaginary adventures as much as she loves playing in the park with her friends. One day Manal notices a little girl sitting by herself in a corner at the park. Even though the little girl can walk, and Manal cannot, it is Manal who tries to get her out of her shell and forms a connection with her new friend.

As part of QFI’s Arabic language programs in celebration of the Qatar-USA 2021 Year of Culture, we sent this Arabic language picture book to several Kindergarten classrooms in Arabic immersion schools that we support. Teachers Tayseir Mahmoud and Ghada Zakaria at the Arabic Immersion Magnet School (AIMS)** in Houston, Texas read the book out loud to their kindergarten classes.

After a discussion of the book, the teachers used the “Create Your Supercharacter Activity” booklet developed by Qatar Children’s Museum (QCM)* to engage the students in an activity in which they created their own “supercharacters” or superheroes.  The students then filled out worksheets with their character’s strengths and drew pictures of their creations.

*QCM is under development by Qatar Museums and is opening soon. The museum provides cutting-edge child developmental settings and resources to help children and their families thrive.  The museum will focus on educating future generations on how to contribute confidently to a sustainable future.

**QFI supports several Arabic dual language immersion elementary schools in the United States, including the Arabic Immersion Magnet School (AIMS) in Houston, TX. AIMS began building its elementary school immersion program in 2015, and the school has continued to add a grade every year. Currently, AIMS offers K-5, with plans to expand to grade 8.