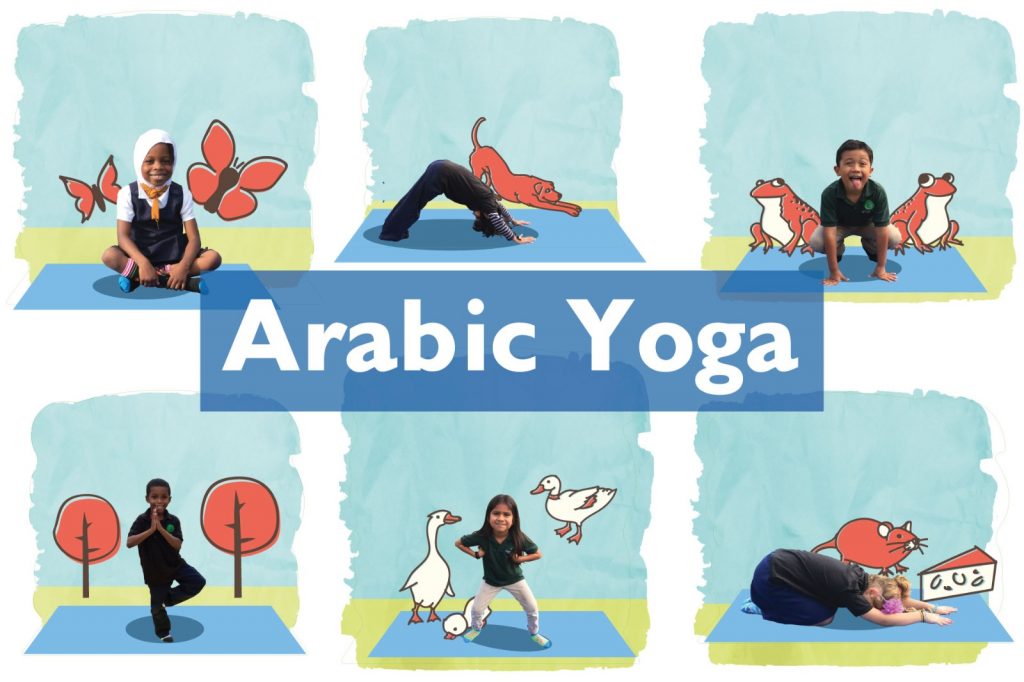 Language, culture, and sport have always been connected for Caroline Robinson. As an undergraduate at the University of North Carolina (UNC) at Chapel Hill, where she majored in Arabic and French, Robinson remembers the department being “super phenomenal” at organizing extra-curricular activities. “We had tons of cultural activities and calligraphy nights, as well as Arabic poetry and dance evenings,” she says. 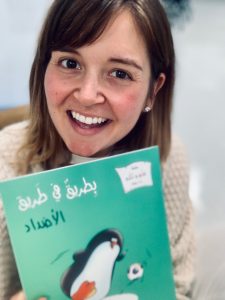 So when Robinson landed a position at the elementary-level Arabic Immersion Magnet School (AIMS) in Houston, Texas, where she taught first and second grade Arabic immersion, the two were a perfect fit. AIMS already had a program of teaching yoga in Arabic. Robinson was a certified fitness instructor with a passion for health, wellness, sports, and yoga – as well as a master’s degree in teaching Arabic. Now she had the opportunity to bring both skillsets together.

Social-Emotional Learning in the Arabic Classroom

The former Assistant Principal at AIMS, Eden Bass, had developed a core yoga curriculum for the school’s physical education classes. “My role was figuring out how we could integrate that into the regular classroom,” says Robinson, who sees one of the benefits of yoga as its ability to bring children back into focus, to calm them, or to help them transition to a new activity. “My goal was: okay, how do we bring this aspect of social-emotional learning into the full-time Arabic classroom?”

An adventure in Arabic: ‘stop’ and ‘drop’

She started by taking the well-known children’s song, “We’re going on a bear hunt”, and adapting it to an Arabic version. “We turned it into ‘I’m going on an adventure’, or ‘Adhab fi mughaamira,’” she says. Different students would take turns talking out loud about what animal was associated with the yoga pose they saw on that day. “And then everyone would stop – and drop into that pose.” This helped them remember the vocabulary. Robinson would also allow students to sequence an adventure for the end of class every day, which would involve them writing out the words in Arabic and then leading the exercise. 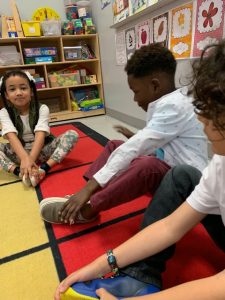 Qatar Foundation International (QFI) had already made lesson plans available on Arabic Yoga in Arabic and in English written by Eden Bass. But after the COVID-19 pandemic began, it wanted to make this even more accessible to all the students who were having to stay at home. “That was when QFI approached me about doing this yoga series online,” says Robinson. “So, I filmed them live from my home.” Describing the format as very call-and-response, she says that the videos are “definitely an introductory yoga as well as an Arabic course.” Aimed at Arabic language learners, Arabic speakers, and people who are new to both Arabic and yoga, the short videos are available on QFI’s website – with parents and families strongly encouraged to join in the fun!

Robinson goes back several years with the organization. She first found out about AIMS through a QFI newsletter, and says her relationship with QFI “has always been wonderfully positive and supportive”. “When I worked at AIMS, QFI was very closely involved in the process of supporting whatever the future of that school was,” she says. “Not just financially – they would also facilitate an Arabic immersion teachers institute, where they would pull together all the Arabic immersion teachers from across the United States, and we would have a week of unadulterated time to talk about how to develop what we’re trying to do, which was phenomenal – and which no one has done before.”

‘A Rich and Generous Culture’

Now she has returned to her old college in North Carolina, where she is teaching first and second year Arabic – and trying to get a high school program up and running in the state, too. It’s evident that her passion for both the language and for yoga is as strong as ever.

“What I’ve learned over the years,” says Robinson, who spent time living in the Middle East after graduating, “and I’m sure others who are getting more and more into their Arabic studies know this too, is that I discovered one of the richest and generous cultures I’ve ever experienced in my life. That impacted me so positively that I really want my students to be able to have that experience for themselves.”

Robinson can’t wait to share that enthusiasm face to face with her students again. And when she does, “I will say, absolutely, we’ll be doing Arabic yoga in the classroom. One thing I learned being an elementary educator is that there’s stuff that works for any language learner. If you’re seven or 17, moving and saying a word at the same time is a much more effective way to learn a word than sitting in a chair and doing a ‘repeat after me’.”